NAGAP is the only professional organization devoted exclusively to the concerns of individuals working in the graduate enrollment management environment, and congratulates the colleagues below for receiving one of our annual awards. Information regarding past Distinguished Service winners can be found here.

NAGAP award nominations will open in late 2022. Recognize your colleagues by nominating them for one of the awards featured on this page.

The Visionary Award may be presented to an individual in the higher education community who has demonstrated a unique and innovative vision in the graduate enrollment profession, in the field of higher education, or, in NAGAP. The recipient is not required to be a member of NAGAP.  S/he will have demonstrated a potential for thinking outside of the box and for leading bold, cutting-edge and successful initiatives that have benefited the graduate enrollment management community.

The Future Leader Award may be presented to an individual who is a future leader within NAGAP and the graduate enrollment management profession.  Leadership qualities can be exhibited through NAGAP committees as well as presentations at conferences. The future leader award is given to an emerging leader who has displayed leadership and enthusiasm to the profession and also to NAGAP. Nominees must be graduate admissions professionals, with a NAGAP membership of five years or less. Past recipients include:

2015 - Excellence in GEM: Integrating Stakeholders in All Areas of the Student Life Cycle - Purdue University

2012 - Defining Value Beyond the Classroom: Unifying the Academic and Extracurricular Experience - Stetson University College of Law

2000 - Best Use of Technology -  Kirksville College of Osteopathic Medicine

The Building Bridges Award may be presented to an individual who helped to build bridges of communication, dialog and exchange within the graduate enrollment management community and/or NAGAP. The award also recognizes an individual who champions the issues of access and equity in making graduate education available to all. Past recipients include: 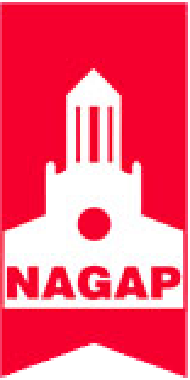